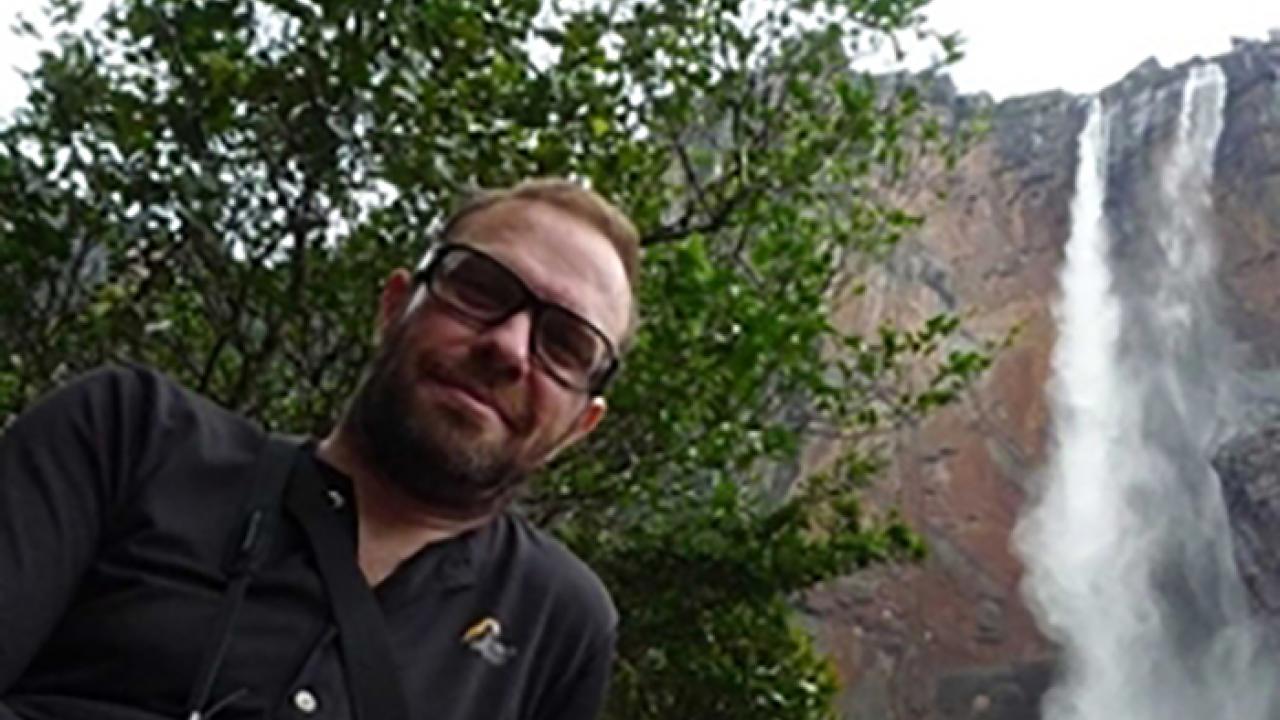 Shay O'Farrell, who hails from Ireland, is a Postdoctoral Research Fellow in the Department of Environmental Science and Policy. His work focuses on movement tracking data to understand how and why people and animals choose to go where they go.

What is your background? Where are you from? How did you get involved in science?

Oddly for a scientist, my undergraduate degree was actually in marketing, which I studied in my homeland of Ireland.  But about 15 years ago, I started SCUBA diving in New Zealand and was just blown away by the underwater world.  I then began a fairly long (but very scenic) route into science, first as a volunteer on various marine science projects, and then as a staff member as my experience grew.  After a few years, I decided that I needed to formally improve my science knowledge, so I did an Master’s degree in marine environmental protection at the University of Bangor (Wales), followed by a PhD in marine biology at the University of Exeter (England) and the University of Queensland (Australia). I then spent a year at The Smithsonian Marine Station in Florida, and now here I am in beautiful UC Davis – and I’m terribly excited about it!

Tell us a little about your research?

My PhD reseach was in coral reef fish ecology but I guess I would now call myself a movement ecologist – basically, I use satellite tagging data to understand how and why people and animals go where they go. In my postdoctoral research here at UC Davis, I am working with Professor James Sanchirico (the associate director of CMSI) in trying to understand how commercial fishermen decide where to fish. The most fascinating aspect of the research is that it spans a range of different scientific disciplines, including behavioural economics, cognitive psychology and machine learning, as well as my own field of movement ecology. I now like to think that my time spent studying marketing was not wasted after all – my favourite discipline during my undergrad degree was consumer decision making (‘Why do people prefer Product A to Product B?’), and I am now asking similar questions about fishing grounds, using the same theoretical foundations.

What is the hardest part about the research process?

Criticism! You have to learn not to take it personally, though, as incisive criticism makes your science so much stronger. But it can take a while to thicken your skin - most of us are not used to people publicly criticising what we do.

A common tool used in fisheries management is to ‘close’ areas of the sea to fishing, either permanently or seasonally. The work that James and I are doing will provide marine resource managers with a way of predicting the impacts that various management and policy options will have on the fishing fleets, and thus on the fish too.

What has been your greatest accomplishment so far? What are you most proud of?

I spent quite a bit of time in the Philippines, which I loved, working closely with four neighboring villages in helping them to create a small network of locally managed marine reserves. The reserves were designed with direct input from the fishing communities and took a lot of negotiation and discussion. In the end, the fishers were the ones who were most proud of their reserve network, and are now using their experience to help other fishing communities set up networks of their own, which is very gratifying. A bonus to spending so much time in the Philippines is that I now sing a mean karaoke tune, too.

What are your plans after this?

I’m excited by the idea of applying some of our spatial decision-making work to wide-moving animals, which have to constantly make decisions about where to go next. Each animal does have imperfect knowledge of its environment, such as the present location of prey, and the consequences of making a bad decision can be stark. Because of the direct impact on an animal’s survival, and thus the number of offspring it will ultimately produce, I think that evolution is likely to have favoured the ability to make relatively ‘good’ spatial decisions using limited information, and I would like to investigate whether this is true, and if so, how does the process work.  Which animal would I study? Well, I’m open to ideas, but in my first ever project as a marine science volunteer, I had the privilege of spending a few months working with great white sharks in South Africa. I still have a soft spot for these awesome predators – and there’s an increasing amount of high-quality white shark movement data out there.

Do you have any advice for recent undergraduates interested in science and research?

It really does take both passion and tenacity to get a job in marine science, so figure out the thing you love doing best, and pursue it relentlessly!  And don’t forget there are many options for working in marine science that don’t necessarily involve doing research or studying – a lot of great work being done by conservation NGOs is more about the application of tried and tested approaches than about developing new knowledge.