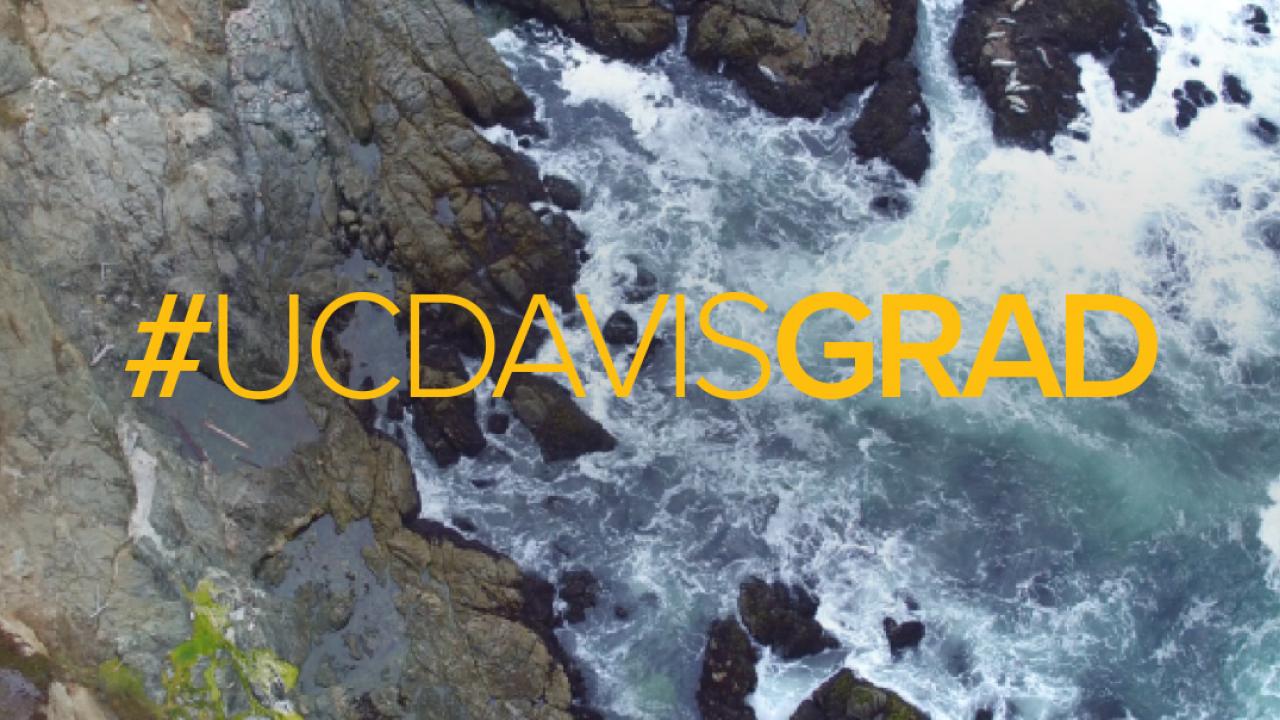 Congratulations to the UC Davis Marine and Coastal Science Major Class Of 2020!

Note: Some graduate names are not shown due to privacy requests, but we're super proud of all of them, too!!!

We also have a brand new Ph.D. to celebrate, congratulations to Dr. Melissa Ward!

We celebrate all of you and the dedication, insatiable curiosity, and passion for marine science that has brought you here and will lead you to revolutionize scientific understanding of our field, communicate and connect with policymakers and coastal communities, and become educators, researchers, and world-changers.

How would our grads describe their time at UCDavis in a single word?

Here's what they said:

Read some of their stories and where they're headed next:

"As a Ph.D. student in Tessa Hill's lab, I studied carbon cycling in seagrass meadows and salt marshes. My work examined how these habitats can mitigate climate change and ocean acidification through carbon sequestration. This work took me up and down the coast of California from Bodega Bay for 5 years, with a van full of equipment to collect sediment cores and deploy water chemistry sensors.

I will begin a post-doc as a Fulbright Scholar and AAA (Australian-American Association) scholar next year (which was delayed due to COVID). In the meantime, I am teaching marine science at UC Davis, and working as a research fellow for Project Drawdown - modeling ocean-based solutions to climate change."

"Somehow, someday, I will be helpful to the animals that work alongside the world's largest support system: the ocean"

- Jeffrey Nishimura, 2020 Marine and Coastal Science major with a focus on Marine Ecology and Organismal Biology

"After graduating, I will be doing a summer internship at the Monterey Bay Aquarium Research Institute before starting my Ph.D. in the fall at the University of Southern California in the Marine Biology and Biological Oceanography program! I plan to mentor other first-generation college students like me and increase diversity in my field."

- Tina Nguyen, Marine and Coastal Science major with a focus in Marine Ecology and Organismal Biology

"I came into this university as an undeclared, first-generation student with little idea of what my path was going to look like and what resources were available to me. When I stumbled into the Marine and Coastal Science major at the wrap of my freshman year, a fire was lit in my belly that kindled my passion for marine science, climate change, and the translation of science into policy (or lack thereof).

Not only was I readily welcomed by a supportive community who further inspired me, but the interdisciplinary nature of the major kept me on my toes and challenged me to think beyond my focus. The meaningful connections I formed with my professors in combination with my involvement with Bodega Marine Laboratory enriched my undergraduate experience and rendered it truly life-changing."

- Anyela Gonzalez Casillas, Marine and Coastal Science major with a focus in Oceans and the Earth System

"This next year I'm actually going to be working as a behavioral therapist for children on the autism spectrum. Eventually, I hope to go back to school for my master's in Education and work as a high school Chemistry and Marine science teacher!

I loved being in such a close-knit major community and have found some really great friends here who are all so passionate about marine science. Some of my favorite memories were in the vanpool to Bodega Marine Lab hanging out with friends, fighting for the front seat, and running into each other around the lab all working on different assignments. I'm also really grateful for my time working at Bodega Marine Lab, because I had such wonderful female scientist mentors to give me advice and teach me about the world of research."

"This fall I will be starting law school at The University of San Francisco to pursue a career in Environmental Law! One of my favorite memories in this major was spending 6 weeks at BML last summer. It was so much fun and Bodega was beautiful!"

- Amanda Outcalt, Marine and Coastal Science major with a focus in Oceans and the Earth System

"Next year I'll be working in the Johnson-Jeffres Lab at the Center for Watershed Science studying chinook salmon. After that, I hope to get my masters studying the effects of anthropogenic noise on marine mammals.

I had such an amazing time being an MCS major at UC Davis. Studying at Bodega Marine Lab was the highlight of my college career. I made friends that I will have forever."

- Alexandra Chu, Marine and Coastal Science major with a focus in Marine Ecology and Organismal Biology