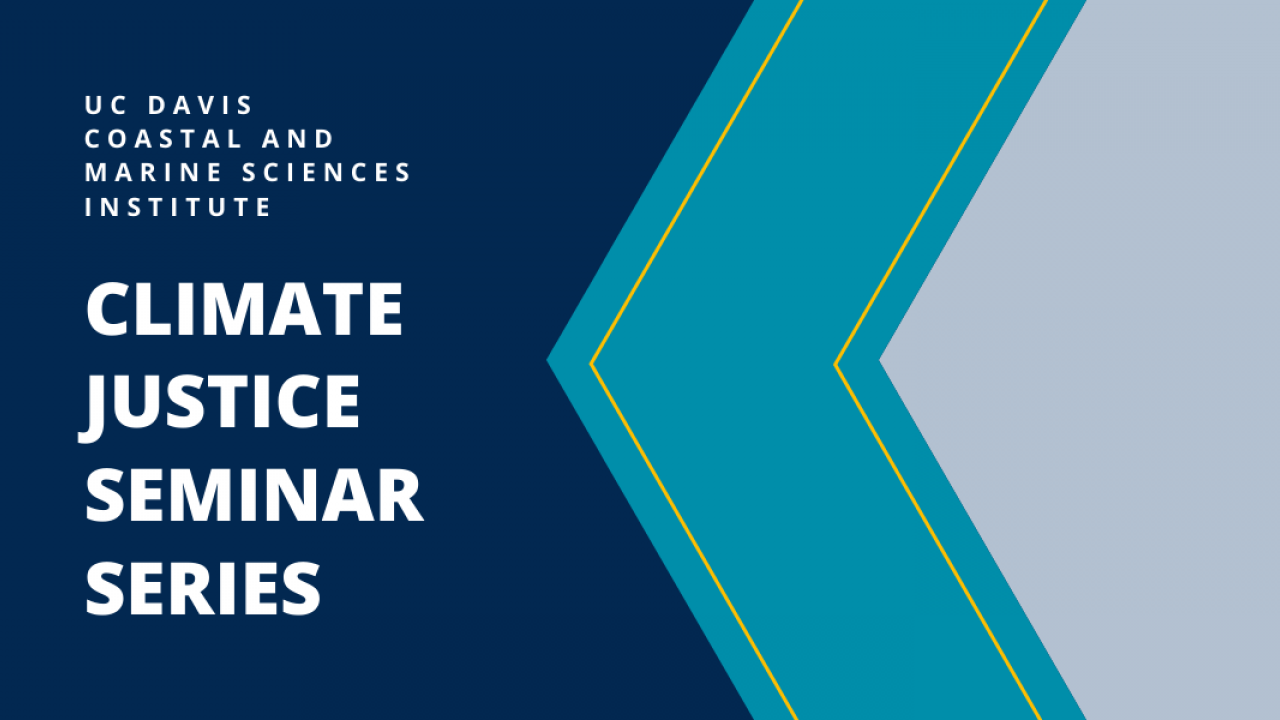 The first seminar in CMSI's new Climate Justice Seminar Series will be on November 30th at 1 pm and will feature speaker Dr. Ayana Elizabeth Johnson in a moderated discussion with Ph.D. Candidate Carina Fish.

While scientists have produced a wealth of knowledge about climate change, the incorporation of climate science knowledge into plans for the future is less robust. Additionally, as both the science of climate change and the resiliency plans to address it are conducted and implemented, biases and inequalities abound. What is deemed worthy to be researched and funded? What, where, and who are invested in to mitigate the impacts of climate change? These questions and their answers are brokered by those in power and with the most resources. Communities of all types face climate change risks, but as historically underserved and marginalized communities disproportionally bear the negative impacts of environmental policy decisions and practices, so too will they bear the brunt of adverse climate change impacts. These communities have long been organizing, demanding to be heard and invested in.

This virtual seminar and workshop series will explore how scientists can leverage their training and expertise to support the climate justice movement. The climate justice movement frames climate change not just as an environmental issue, but as a moral imperative to ensure that the needs of all people- regardless of race, geography or socioeconomic status- are included in the decisions about and solutions to climate change. 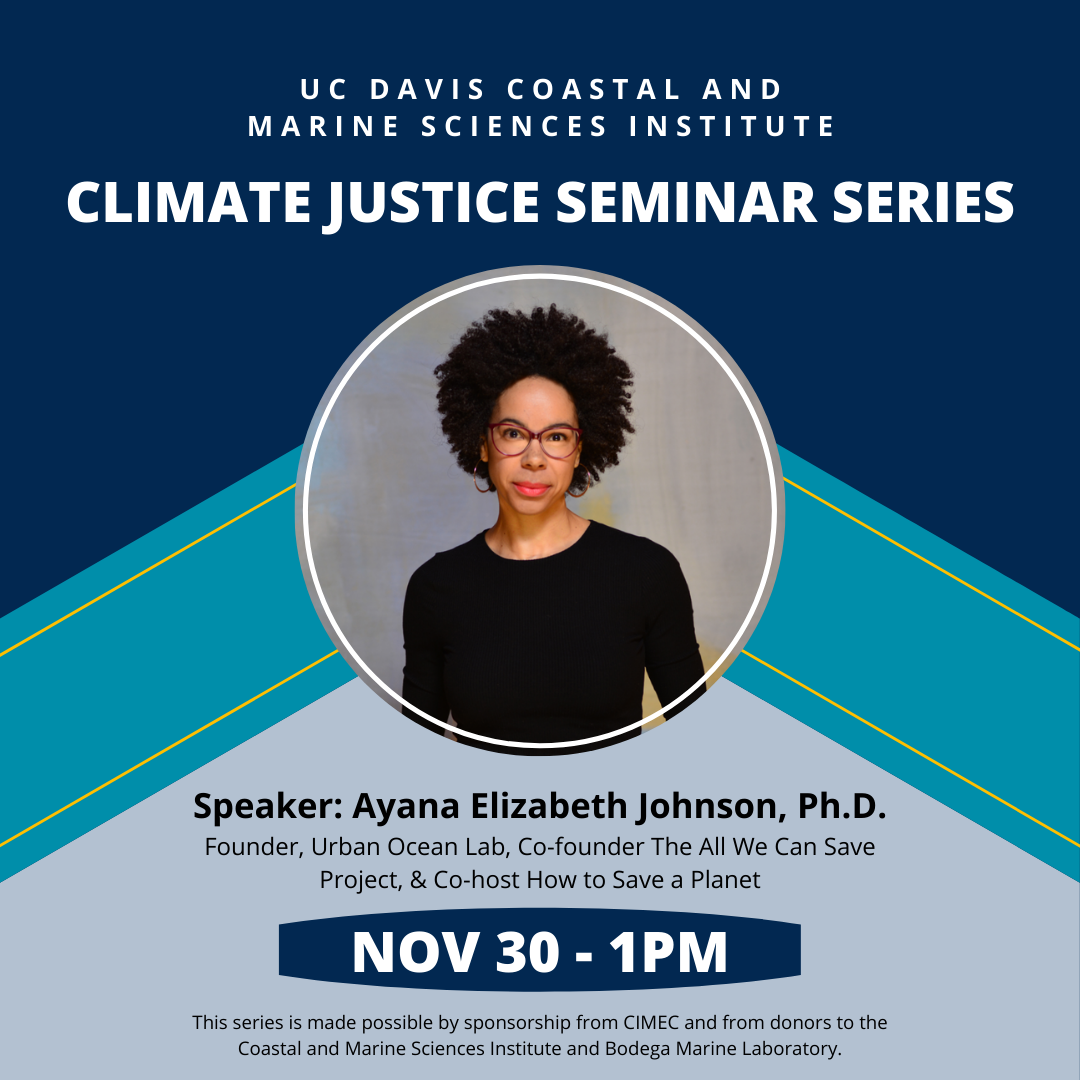 Dr. Ayana Elizabeth Johnson is a marine biologist, policy expert, writer, and Brooklyn native. She is founder of Urban Ocean Lab, a think tank for coastal cities, and is co-creator and co-host of the Spotify/Gimlet podcast How to Save a Planet. With Dr. Katharine Wilkinson, she co-edited the anthology All We Can Save, and co-founded The All We Can Save Project.

Recently, Ayana co-created the Blue New Deal, a roadmap for including the ocean in climate policy. For three years, she taught a seminar on urban ocean conservation as an adjunct professor at New York University. She curates and hosts the Science & Society series at Pioneer Works in Brooklyn.

Previously, as executive director of the Waitt Institute, Ayana co-founded the Blue Halo Initiative and led the Caribbean’s first successful island-wide ocean zoning effort, resulting in the protection of one-third of Barbuda’s coastal waters. She then led the growth of this initiative, launching it on Curaçao and Montserrat, in partnership with the governments and stakeholders. Prior, Ayana was Director of Science and Solutions at the Waitt Foundation, managing a diverse portfolio of ocean grants. She has also held policy positions in the National Oceanic and Atmospheric Administration (NOAA) and the Environmental Protection Agency (EPA).

Her volunteer work focuses on building community. Ayana was co-director of partnerships for the March for Science, creating a coalition of over 300 organizations that inspired over 1 million people around the world to take to the streets to support the role of science in policymaking. She serves on the board of directors for the Billion Oyster Project, GreenWave, and World Surf League's PURE, on the advisory boards of Environmental Voter Project, Evergreen Action, Scientific American, Science Sandbox, Azul, and Oceanic Global, and as a fellow at The Explorers Club. To develop a local network of ocean professionals, she founded Team Ocean NYC. She is a committed mentor for next generation conservation leaders.

Ayana earned a B.A. from Harvard University in Environmental Science and Public Policy, and a Ph.D. from Scripps Institution of Oceanography in marine biology, with a dissertation on the ecology, socio-economics, and policy of sustainably managing coral reefs. For her research, she was awarded fellowships from the National Science Foundation, Switzer Foundation, and American Association of University Women. The fish trap she invented to reduce bycatch won the first Rare/National Geographic Solution Search. She has been a resident at TED, a scholar at the Aspen Institute, a fellow at Emerson Collective, a science scholar at Pioneer Works, and named to the Grist 50, UCSD 40 Under 40 Alumni, and Elle’s 27 Women Leading on Climate. Outside Magazine called her “the most influential marine biologist of our time.”

She is the proud daughter of a teacher/farmer and an architect/potter. Her work has been featured in The New York Times, The Atlantic, Outside Magazine, and Nature magazine. Her op-eds have been published in The New York Times, Washington Post, Los Angeles Times, The Guardian, and Huffington Post, and she blogs on Scientific American. She is a passionate advocate for coastal communities, and builds solutions for ocean justice and our climate crisis. Find her @ayanaeliza.

This seminar series is sponsored by CIMEC and CMSI