Into the Velvet Jungle

Tyler Schatto is a student at Santa Rosa Junior College. He was mentored this summer by Luis Morales and Suzanne Olyarnik. 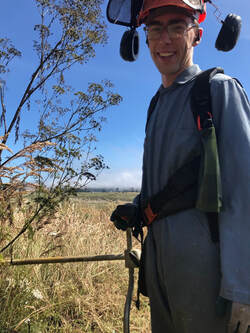 In 2019, Bodega Marine Reserve was my summer hangout spot. With my mentor, Luis A. Morales, Steward for BMR, I conducted field surveys, implemented and updated signage, and  utilized a selection of plant management techniques to reduce invasive species populations. Along the way, I learned several identification markers for coastal prairie plant and bird species, I learned how to work safely in rugged environments and now, I have a better understanding of land management techniques to restore native habitat and implement ecological enhancement projects.

At BMR, conservation of native flora biodiversity is a primary focus. Velvet Grass (Holcus lanatus) is the greatest threat to native plant species here, wholly overtaking great swaths of native coastal prairie. Luis and the team at BMR are testing a method to reduce Velvet Grass populations by mowing two times per year instead of just once. The BMR team hypothesizes that the grass puts a large portion of its energy into growing its flowers, and that a second annual mow occuring after flowers have regrown and matured will lead to greater percentages of Velvet Grass dieoff. I was able to participate in the experiment by both mowing and observing test plots. Additionally hoeing and hand pulling in areas where the Velvet grass has the potential to spread quickly. 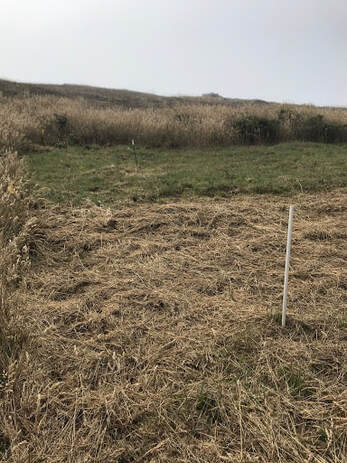 Other plant populations we managed included Bull Thistle (Cirsium vulgare) by the bluffs, Rabbits Foot (Lagurus ovatum) and Rattlesnake Grass (Briza Maxima) in the coastal prairie, and spurge (Euphorbia lathyris) in the dunes and marshes, which each require their own specialized approach and adaptive land management technique.

From a wider perspective, my time was focused on learning many of the themes and overarching approaches used in natural land management. BMR uses adaptive management, a concept focused on the reactive reworking and adjusting of land management plans to cater to changes in the local environment.

As such, the BMR Team and I met frequently, evaluating the state of the reserve and adjusting priorities. For example, after one land survey, we found a choke point where Velvet Grass was likely to spread rapidly into an area of pristine native coastal prairie. We were able to adapt our plans to focus on that area, hand pulling several of the most dangerous plants and spreading mulch to create a barrier beyond which the Velvet Grass will not spread. 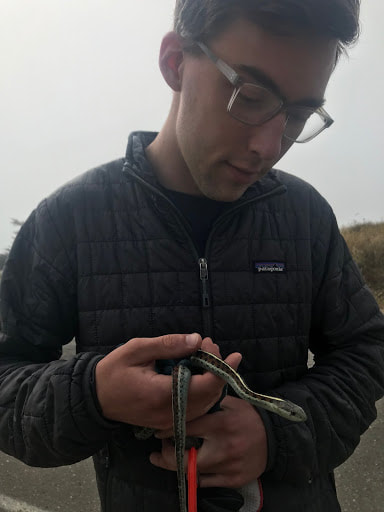 Another amazing opportunity I experienced was a nature hike through the saltwater marsh, led by former BMR director Peter. He showed a group of us almost every single plant, native or otherwise, that lives in the saltwater marsh along Bodega Bay. He has been leading these nature hikes for several years, and he and the BMR crew are able to talk about fluctuations in plant populations. There were several native plant populations that have rebounded surprisingly well - in one case, a plant population had increased from less than 10 individuals the previous year to well over 100 individuals at the time of our hike. Peter was able to show me the anatomical markers botanists utilize most often to identify and distinguish different plant species, which I was able to use directly in the field during surveys. My observations in the saltwater marsh helped me to think about the reserve as several smaller ecosystems, interconnected with complex relationships.

The SRJC-BML mentorship/internship program is valuable to anyone who is interested in life sciences, land management, or the sciences in general. It provides networking opportunities, career path guidance, and a very valuable perspective into the professional and academic sciences that is hard to acquire in a classroom, especially at a non-research-based community college. The people I met were unique and amazing individuals who showed a real interest in me, and the experiences I had, I will cherish forever. Few people are privileged with an opportunity to immerse themselves in a career before starting it, and this internship provided that for me.

No lab? No problem; My summer with foraminifera

Embracing change, redefining failure, and the next step

The 2020 internship experience: studying purple urchins from my kitchen table