Research conducted in Brian Gaylord's laboratory explores how organisms interface with physical attributes of their environments, and how such interactions influence population pattern.

Effects of turbulence on larval settlement 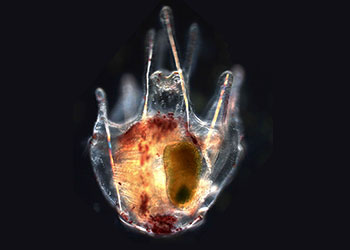 The Gaylord Lab and colleagues recently discovered that intense fluid turbulence sparks a previously unknown response in larval sea urchins. It causes larvae to abruptly transition to a physiological state where chemical cues induce settlement. This response could improve the chances that larvae end up in suitable habitat, since strong turbulence arises primarily only on wave-swept shores preferred by adults. Work on this topic has led to publications in the Proceedings of the National Academy of Sciences, and Biological Bulletin.

The structural properties of the tissues that make up the body parts of organisms can play important roles in dictating how plants and animals interface with their environments. Work by the group has explored how bottom-dwelling invertebrates filter tiny food particles from the water column – in particular how they overcome limitations on the stiffness of the fingerlike projections they use as capture devices. We also developed new techniques for measuring the strength of microscopic shells of larval mussels, through which the Gaylord Lab showed that ongoing changes in ocean chemistry decrease the forces needed to break them. Findings from these research efforts have appeared in the Journal of Experimental Biology, including a contribution designated as a ‘Highlights 2011’ article.

Physical stress and the mechanics of disturbance 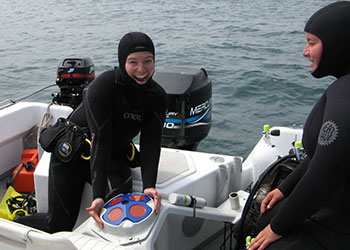 The dynamics of populations often track chronic or episodic agents of mortality, many of which are abiotic. Members of the ecomechanics lab have been working to understand how mussel beds reduce during low tides the thermal and desiccation stresses encountered by invertebrates that reside within the matrix of the bed. In somewhat contrasting efforts undertaken during periods of high tide, they also quantified wave forces acting on seaweeds of a range of sizes and morphologies; such forces often dislodge appreciable numbers of these organisms during storms.

Dispersal processes and their population consequences

A longstanding problem in marine ecology is determining patterns of population connectivity ensuing from the dispersal of planktonic larvae. The Gaylord Lab has worked to clarify the role of ocean currents in contributing to the establishment of geographic range limits in species with such larvae; resultant insights appear in a recent, highly regarded textbook, Marine Macroecology. They have also studied dispersal of algal spores, as well as transport of nutrients and their uptake by kelp forests. Laboratory members have furthermore quantified properties of the very nearshore currents that likely dominate the dispersal process in many coastal species. These lines of research have produced publications in the Annual Review of Marine Science, Journal of Experimental Biology, Limnology and Oceanography, and Marine Ecology Progress Series. In a project newly funded by the National Science Foundation, Gaylord and colleagues are also exploiting a large-scale die-off of sea urchins to test ideas about recovery dynamics and the degree and character of stochasticity in larval delivery.