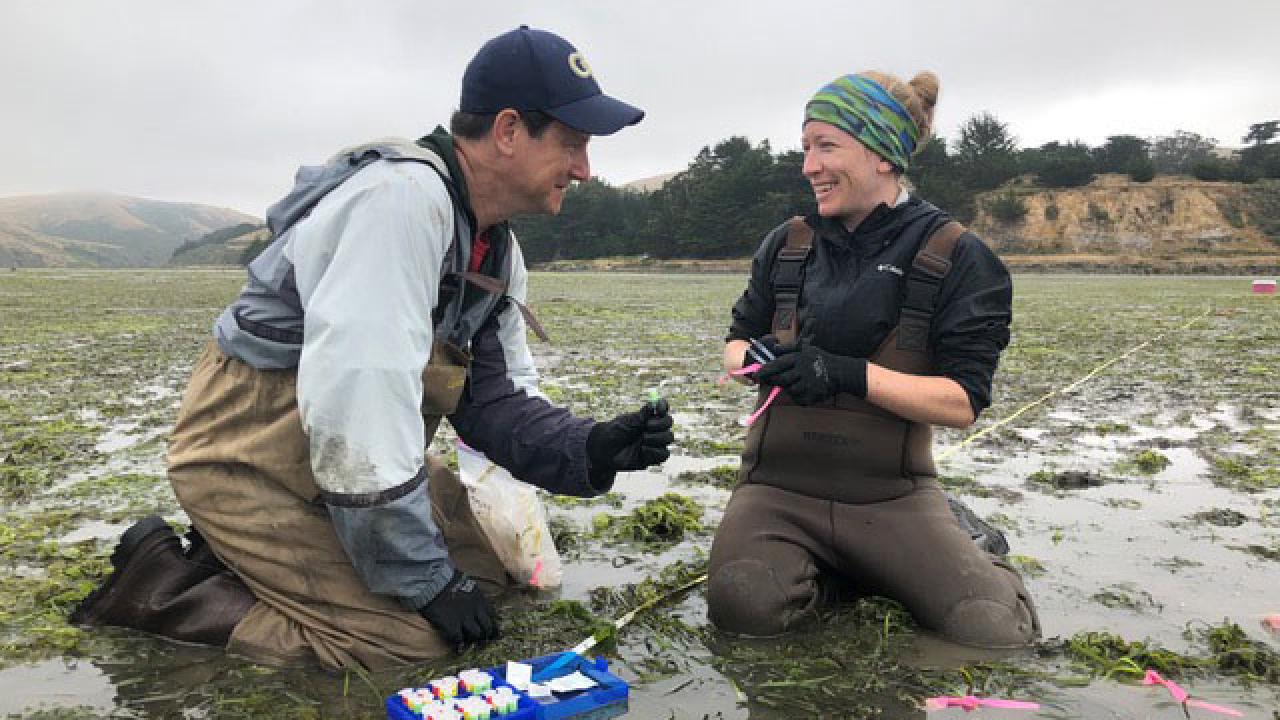 Though bacteria often get a bad reputation, many organisms depend on them. Humans, for example, have gut bacteria that aid with digestion. Similarly, marine plants, like seagrass, host a collection of microorganisms potentially vital to their health. At UC Davis, researchers have created the Seagrass Microbiome Project to learn about these microbial inhabitants. Through the project, they are looking to see whether certain bacteria are fundamental to the plant’s survival.

The Seagrass Microbiome Project started as a collaboration between Jay Stachowicz, a marine biologist, and Jonathan Eisen, a microbiologist. Their objective is to survey the microbiome of seagrass and to analyze its relationship with the plant. “It’s well known that all plants have microbes—bacteria and fungi—associated with them,” says Stachowicz. “Especially in terrestrial systems, people think about crop plants and legumes, or the mycorrhizal fungi associated with plant roots, being really important for those plants. But we haven’t looked at what goes on in marine systems on marine plants until recently.” The project aims to fill that gap of information by using seagrass as a model organism.

Seagrasses are important foundation species in coastal ecosystems. They provide structure in environments with loose sediment, which creates habitat for a diverse array of organisms like fish and invertebrates. The grasses also power the food chain by housing algae and bacteria, which are grazed upon by small invertebrates, which are then consumed by other animals. “Everything else literally rests on them,” Stachowicz says. “They provide both a source of food and a source of physical structure on which the entire ecosystem depends.”

Stachowicz’s lab studies the common eelgrass (Zostera marina), a species of seagrass found in the Atlantic and Pacific Ocean. “When we started, we didn’t know what microbes were there,” says Stachowicz. “And so, we had to start with the very basics of describing what was found on different parts of the plant, and whether that varied from place to place.”

Recently, Stachowicz and his team have managed to find a consistent pattern: the presence of sulfide-oxidizing bacteria that are more abundant on the seagrass roots than in the surrounding sediments. One challenge for rooted plants living in marine habitats is low oxygen. As accumulated organic matter in the sediment decomposes, oxygen is depleted, and toxic sulfides are produced as well. “There are bacteria on the roots that are capable of oxidizing those sulfides, rendering them harmless” explains Stachowicz. “We think this may be a way that the microbes play a role in the success of the plants, though this remains to be directly tested.”

Although researchers have surveyed the general outline of what bacteria are present, the picture isn’t complete yet. “We’re getting a good map of what’s there,” says Stachowicz. “Now we need to know: What do these bacteria do? Are they just responding to the plant? Do they influence the plant in some way? Or is it just the environment that drives them?” In order to investigate these relationships, more research is needed.

Currently, Stachowicz’s lab is conducting research on how the microbes affect the plant’s response to stressors like temperature and disease. He emphasizes the value of learning about the plant’s microbiome. “If we think seagrasses are important—which we do—and we want to restore or protect them, knowing the role of these microbes is something that we’re going to have to account for looking forward,” Stachowicz tells me.

Though invisible to the human eye, bacteria occupy every nook and cranny, even seagrasses, as the Seagrass Microbiome Project tells us. What do the bacteria do for these plants, and how important are they? Well, that’s a question that still needs to be answered.