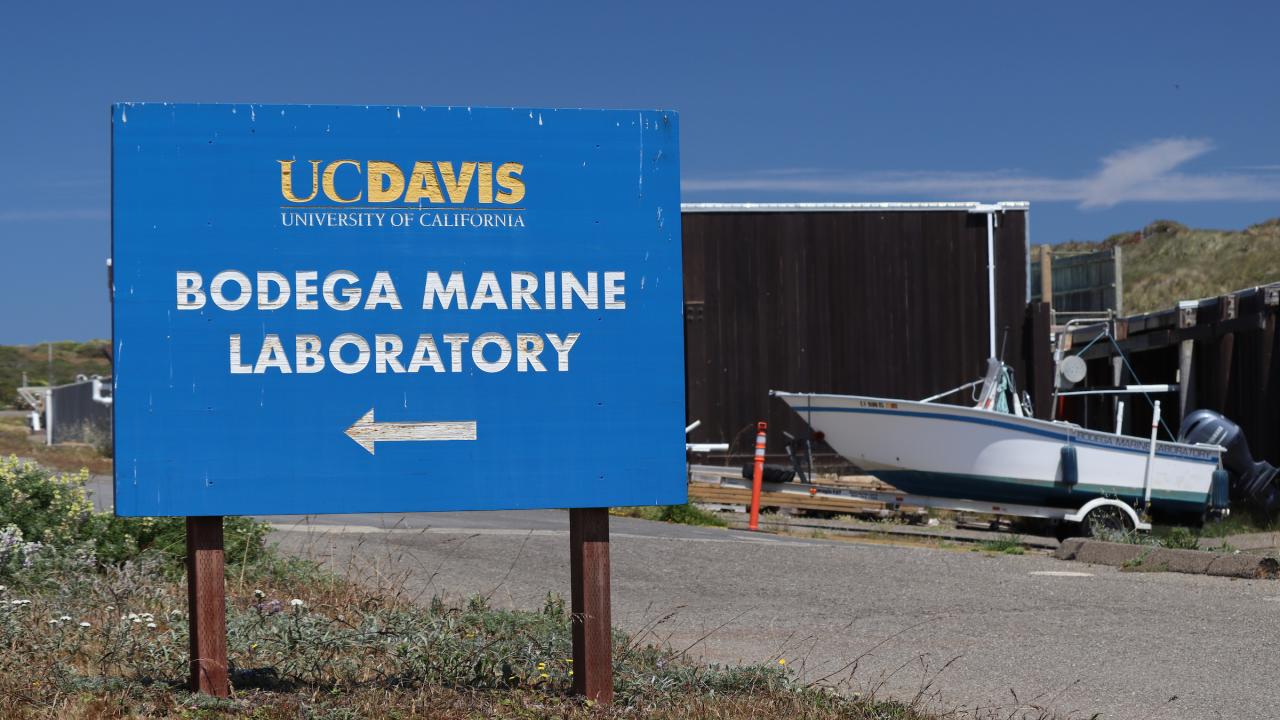 The heroes of science aren't always those who publish groundbreaking papers; in fact, these heroes don't even publish at all. Yet their contributions are vital for progressing research, particularly in the ocean field. Marine scientists collect data through voyages in the high seas and dives in the deep depths, and scientific boating and diving in these realms can be dangerous, bringing peril to those caught unprepared. This is why the UC Davis Boating and Diving Safety Team at the Bodega Marine Laboratory (BML) works tirelessly to avert tragedies by training and serving scientists at UC Davis and throughout California.

Why they do what they do: the team's origins and dangers of scientific boating and diving

Boating is an exciting experience, but not without risks. Riding a boat is like driving a car, but on a more volatile road that can turn against you at any time. In scientific boating, research vessels must often venture into remote and unpredictable waters that can be much more dangerous than those experienced by recreational boaters. Hazardous weather or close encounters with other boats can come up unexpectedly. Being attentive to preventative and preparatory measures–wearing a life jacket, properly stowing cargo, bringing the proper equipment, preventing overpacking, knowing proper communication response techniques, and knowing maritime laws–can make the difference between overcoming stormy seas and disaster. This is highlighted by the 5,265 accidents and 767 deaths reported by the US Coast Guard in 2020 alone, 77% of the deaths being from boats where proper safety protocols were not practiced.

Scientific diving also holds risks. Venturing deep underwater takes divers to a place where vocal communication can’t occur and where water pressure distorts the gases we breathe. Divers must constantly apply various techniques to acclimate to these conditions; if not managed appropriately, they can get lost in zero-visibility waters, run out of air too deep below the surface, or the air itself can cause severe injuries like decompression sickness and oxygen toxicity. Fortunately, the importance of diving safety is well-addressed with many scientific diving programs in place across the country with support by the American Academy of Underwater Sciences (AAUS), which formed in 1977 to develop a governing standard for scientific diving. The UC Davis Diving Safety Program itself formed in the 1960s in response to an earlier diving accident and contributed to the AAUS’s formation.

The UC Davis Boating Program first formed in the wake of an accident in 2000 during a Sea of Cortez expedition that tragically killed five researchers, including two UC Davis researchers–ecology professor Gary Polis and postgraduate researcher Michael Rose–when their research vessel capsized during rough weather. A subsequent investigation revealed an unfortunate recipe for disaster: the research vessel was inadequately built for stormy water by lacking means of removing seawater, was overpacked, and several members on-board were not wearing life jackets. It was further realized that existing boating safety services were ill-equipped to effectively prevent such events, lacking the same support and standards in scientific diving. This revelation prompted the university to recruit Boating Safety Officer James Fitzgerald, who had thirteen prior years of experience in the US Coast Guard, to reform and lead UC Davis' ocean research safety protocols.

Fitzgerald subsequently teamed up with Henry Fastenau, who was the Diving Safety Officer of the UC Davis Diving Safety Program at the time since 1993, to form the UC Davis Boating Safety Program, and served as co-Boating Safety Officers. Though officially separate, members of both programs constantly work together and often act as one team. Fastenau has since retired in 2010, and the team today comprises of four core members, including Fitzgerald himself:

An educator across the state

The team is first and foremost educators with primary responsibilities in providing training to people who seek to work with bodies of water, both in the high seas or on inland waterways (i.e. rivers). Charged with preventing mishaps like the Sea of Cortez tragedy, the team provides the largest boating safety program in California, with hundreds of requests for training coming in each year, including over 125 boaters accepted in 2021 alone. These requests come from universities and government agencies throughout the state including the entire UC and CSU system, the US Fish and Wildlife Service, US Geological Survey, and California Department of Water Resources.

Such safety programs include a variety of hands-on introductory and specialized courses. Reflecting the physical and psychological demands of scientific exploration, these courses are not for the faint of heart–one scientific diving course led by Herum and Kawana at BML trains a minimum of 100 hours over two weeks–often 10 hours per day–as students undertake intensive academic sessions, practice rescue and survival skills in a 14-foot deep unheated outdoor pool exposed to Bodega’s strong coastal winds, and tour the ocean along the California coastline. Boating courses led by all four members are of similar intensity as students learn to tie important knots, operate boats when stuck in dangerous conditions, practice emergency care, and stay alive after abandoning a capsized boat.

Alongside knowledge on general boating and diving skills, these courses also work to develop another vital asset–confidence to stand up for themselves when feeling unsafe. This is particularly emphasized when the team teaches the GAR system, which assigns everyone a green-amber-red evaluation sheet to individually gauge and share how safe they feel about an operation. Flederman considers this among the most important because it eliminates personal ego and gives everyone equal rights to speak up when they feel unsafe and confidence to assert themselves. The team smiled when Fitzgerald recounted a phone call from a former student:

“You saved my life when I went off to do my postdoc because I had this training. I went boating with people that had never had this training and I realized they were going to get me killed if I didn’t do something … and I felt I had the confidence to speak up [and] say ‘look, I’m not comfortable doing this and this is the way I learned it and this is the way we’re going to do it.’ They were like ‘okay!’ and then they learned something new … [that] there’s a better, safer way.”

As students undertake these testing training sessions, they are energized by the cheerful enthusiasm of Fitzgerald, Kawana, Flederman, and Herum to power through and eventually emerge as sharper, stronger, and prepared marine scientists, many of whom go on to tackle challenging fields like the frigid waters of Antarctica.

As teachers, the most rewarding experience for the team is to see successful learning in their students. In the classroom, it’s viewing the exhilarated facial expressions of a lightbulb moment during a class session or witnessing performances unthinkable a few days prior. As Kawana puts it:

“It's definitely the ‘aha’ moment [that is] really rewarding, seeing folks who are not very confident coming in or nervous and apprehensive about either diving or boating and seeing them … strengthening their skills, practicing, and just gaining that confidence.”

But perhaps the most rewarding type of successful learning is hearing about how students saved lives through their training. Fitzgerald expresses how exhilarated he feels whenever he receives a phone call or email recalling how students successfully handled an incipient disaster, whether it is putting out a raging fire, averting a complete breakdown thanks to a tool that was only on board because of the team’s advice, or using a smell test taught by Flederman to detect gasoline leaking into a boat motor and avoiding a potential explosion.

Beyond education: working together to progress ocean research

The team’s responsibilities extend beyond teaching courses at BML. As a founding member of the Scientific Boating Safety Association, established in 2006 to develop a governing standard for scientific boating like the AAUS, the team is proactive in monitoring safety situations, helping set important standards, teaching abroad, and leading other universities and organizations in developing their own safety programs. This requires them to travel frequently, often spending 3-4 months annually on the road to work and teach in the field.

As a UC Davis unit, they are also in charge of overseeing boating and diving research activity within all UC Davis departments, from Veterinary Medicine to Wildlife, Fish, and Conservation Biology, and the hundreds of boats and numerous divers making up field units in Bodega, Orcas Island in Washington, and Baja California. In doing so, they are regularly involved in collaborating with these departments. The team regularly participates with the Bodega Ocean Acidification Research Group in the research of seagrasses and oysters at Tomales Bay, while Kawana uses her expertise in diving and boating to carry out field expeditions with the White Abalone Recovery Program team, which she is also part of; other recent collaborations include working with the UC Davis Tahoe Environmental Research Center and US Army Corps of Engineers to monitor the inflow of water at the severely drought-affected Shasta Dam.

When a UC Davis researcher seeks to conduct field research, they will often approach the team with draft proposal plans for consultation to make sure their proposal includes the good diving practices and safety procedures, has the right resources, and plans for recruiting the right people into the research group.  Sometimes, the “right people” for the research group include the team members themselves: Flederman frequently assists in research data collection as an operator of the vessel or equipment. Plans that involve diving are reviewed by the UC Davis Diving Control Board, which includes Fitzgerald, Herum, Kawana, and other members such as faculty, medical consultants, and professional scientific divers. Meanwhile, Herum and Kawana help service planned diving equipment, while Flederman helps fit larger specialized equipment onto the research vessel to match the researcher’s needs. Once consultation is complete, Fitzgerald (for boating projects) or the Diving Control Board (for dive projects) approves the final plan to allow the research to carry forward.

Making safety accessible to all

From providing in-depth training to engaging with research operations, the UC Davis Boating and Diving Safety Team highlights how important it is for everyone, without exceptions, to be aware and prepared for the challenges we face head-on when engaging with scientific research in the field. Thus, the most important aspect of safety is that it’s accessible to all, which is why the team strives to place emphasis on promoting inclusion of people from any and all backgrounds. Breaking the traditional status quo of a demographically homogeneous boating and diving field enables marine science to grow from the unique experiences of each background and gain a diverse understanding that better tackles the global scientific and conservation challenges that lie ahead. In the end, the goal of the UC Davis Boating and Diving Safety Team is to save lives, and every year without a boating or diving death is a year of success. The team is ultimately here to serve us, the students, researchers, and faculty of UC Davis, to ensure us life, limb, comfort, and confidence as we journey forward to discover the oceans and preserve it for generations to come.

If you are interested in participating in the safety programs and receiving training for your first or next research operation, the team is always open to receiving new students, and more information can be found at the UC Davis Boating Safety Program and UC Davis Diving Safety Program pages!

David is a first-year student studying marine and coastal sciences. Driven by a lifelong fascination with ecosystems and natural history, he hopes to dedicate his undergraduate years to research and promoting awareness about current oceanic issues alongside his studies. He also likes to draw and build Minecraft worlds with friends.