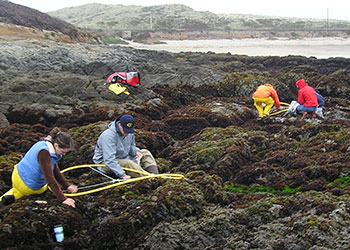 Biodiversity is, simply, the variety of life on Earth, and can be characterized at various levels from genes, to species and ecosystems. Understanding the causes of patterns of the diversity of life on Earth and the functional consequences of natural and human-caused variation in that diversity are fundamental goals of ecology and a focus of active research at BML. These studies are all the more pressing given the impact that human activities have on biodiversity.

The close proximity of a range of habitat types to BML facilitates comparative research on the effects of biodiversity in different ecosystems from kelp forests to mudflats and rocky shores to seagrass beds. The overarching finding from this research is that maintaining the diversity of coastal ecosystems increases the productivity, stability and resilience of these ecosystems in the face of human-caused and natural change. This often works much as diversity buffers financial portfolios from unpredictable market conditions: different stocks (or species in this case) differ in how they respond to variation in the environment, either in space or among locations, such that diversity ensures sustained production.

Specific research from the Stachowicz Lab indicates that these effects of biodiversity are strong across very different ecosystems. Experimental work in kelp forest mesocosms highlights how foraging strategies of different predatory invertebrates combine to ensure that herbivores are kept in check and prevented from overgrazing kelp forests. Across a range of kelp forest sites, those that have a diverse predator community have fewer herbivores and as a result, maintain a lush growth of kelp.

Just in front of BML, a nearly decade-long experiment manipulating diversity of seaweed by the Stachowicz Lab has shown that the effects of biodiversity on ecosystem stability and productivity increase over time. These effects occur because seaweeds use the topographically complex rock in different ways such that no one species can make use of all the space available. Importantly, multi-factor experiments have shown that diversity’s effects are strong—just as important as factors such as grazing that have long been appreciated to play a critical role in intertidal ecology. This work also shows that diversity at the base of the food web can influence the diversity and abundance of animals that use seaweeds for food and habitat. 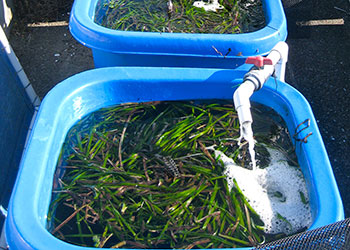 Finally, “hidden” diversity in the form of genetic diversity within species plays an analogous role in communities dominated by a single important species, such as the eelgrass beds found in Bodega Harbor. These productive ecosystems not only provide habitat for commercially and recreationally fished species but also reduce erosion. Yet they are dominated by a single species of seagrass, the eelgrass Zostera marina. A series of experimental and observational studies conducted in Bodega and Tomales Bays by the Stachowicz Lab in collaboration with the Williams lab showed that planting seagrass beds with high levels of genetic diversity enhance the success of those beds, leading to greater production and resilience to overgrazing by migratory geese. Individual genotypes differ in their properties to a sufficiently large degree that they are complementary to one another in their use of resources. At larger scales, BML scientists have helped develop a global network of scientists studying the role of biodiversity at the genetic and species level on the health of seagrass ecosystems. This network (Zostera Experimental Network, or ZEN) was just funded by the National Science Foundation to expand to over 30 sites worldwide across Asia, North America, and Europe and will offer research classes to undergraduates at UC Davis to allow them to participate in research activities at partner sites across the globe.

The Williams laboratory tackles many environmental issues in nearshore seagrass and seaweed communities, which are important for producing food and habitat for other species, many of which are commercially valuable (Dungeness crabs, rockfish) or even endangered. The lab has two major goals. One is to understand how these marine plant communities function. For example, how fast do they photosynthesis and acquire nitrogen to build protein or recycle nutrients and what does the functioning tell us about the plant’s ability to withstand or recover from pollution or invasive species.  The second goal is to apply the research to the management of these important communities, which in the case of seagrasses are in global decline. Physiology is the major research approach and the lab has many different instruments and supports the research of many other researchers and their students.

The Strong Laboratory addresses the trophic ecology of herbivore-plant interactions. They have studied the decomposition of lupine wood by isopods and fungi at the Bodega Marine Reserve (Bastow et al 2008). They have also studied the decomposition of the invasive grass Holcus lanatus on the BMR (Bastow et al 2008b). The studies of the trophic structure in the soil at BMR discovered that dispersal of entomopathogenic nematodes overrides their local dynamics in the rhizospheres of lupine (Ram et al 2008 a & b). Strong’s lab has also studied the interspecific competition of these nematodes at the BMR (Gruner et al 2008). As well they wrote a review of invasive plants for a University of California Press Encyclopedia of invasive species (Evans and Strong 2011). 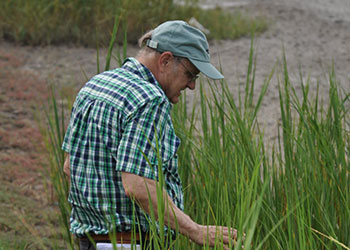 Another area of research in the Strong Lab concerns invasive Spartina species in estuaries. They have been particularly active with the invasion of San Francisco Bay by hybrid cordgrass, Spartina alterniflora x S. foliosa. The Strong laboratory discovered these hybrids during the 1990s and has informed the $21 million eradication hybrid eradication campaign conducted by the California Coastal Conservancy, Invasive Spartina Project. Pertinent to this work are publications on the evolution of self-fertility in these plants and their ongoing hybridization in San Francisco Bay (Ayres et al. 2008 a & b, Sloop et al. 2009, Sloop et al. 2010) and in Spain (Castillo et al. 2010). Their research on the Spartina alterniflora invasion of Willapa Bay, WA has also informed the massive control effort there, and they analyzed the spread of these invaders by means of a stochastic model of remotely sensed spatial data (Dennis et al 2011). The Strong lab has published two reviews of the global invasion of Spartina species and their hybrids (Strong and Ayres 2009 and Strong and Ayres 2013).