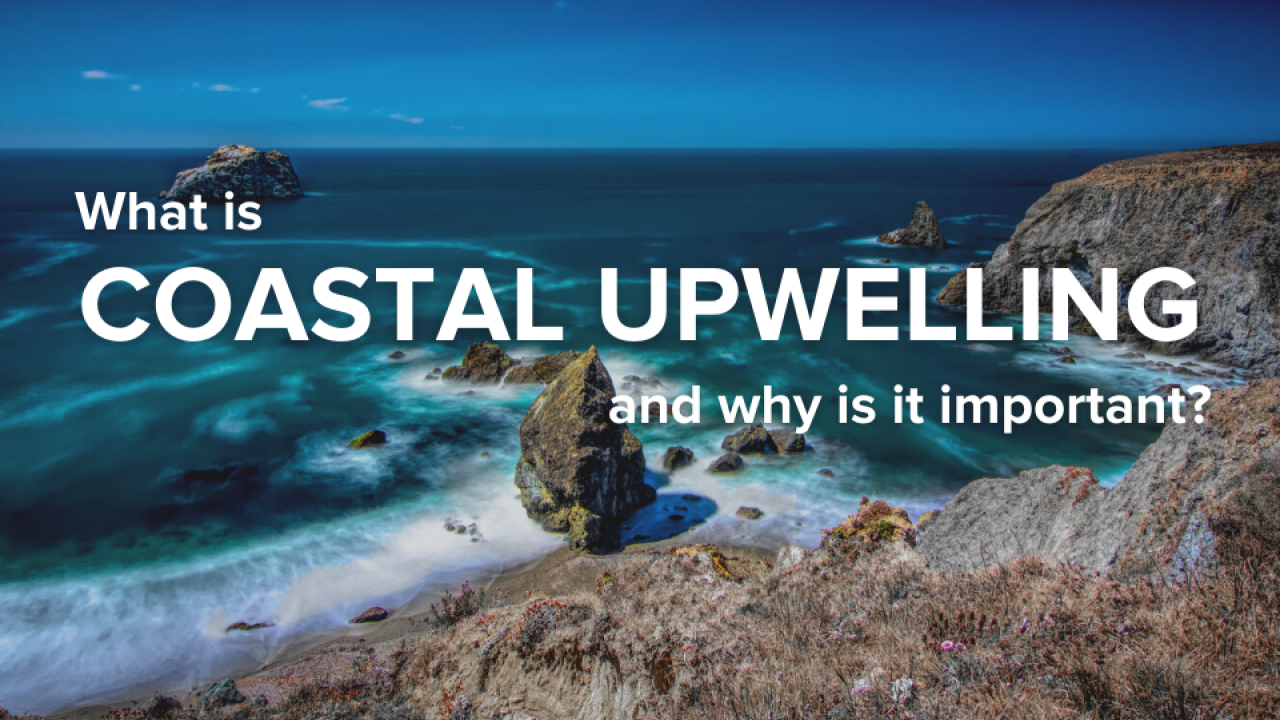 Picture this: Stepping through the doors into the Great Hall of the Bodega Marine Laboratory, you are immediately greeted with a spectacular ocean view through the glass doors down the hall. You walk over to get a better view of the waves crashing into the rocky bluffs on the Reserve, open the doors, and… pow! A forceful gust of wind immediately swoops in to greet you. These strong winds in the springtime are one of the most iconic features of Bodega Bay and the rest of the northern California coastline - they are also the main driver of a phenomenon known as coastal upwelling. 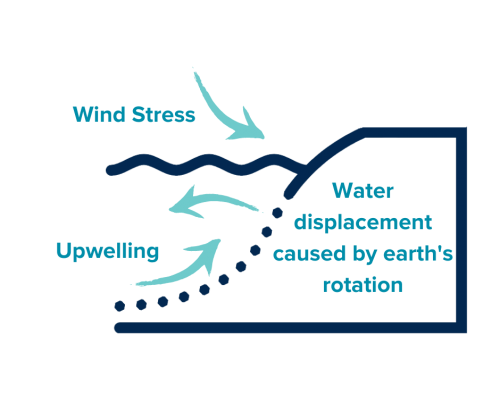 Coastal upwelling is the process by which strong winds blow down the coasts of continents and, in conjunction with the earth’s rotation, cause the surface waters to be pushed offshore. Water from the ocean depths is then pulled up - or upwelled - to the surface to take its place. Coastal upwelling is closely tied to the climate and economy of California; it is the cause of the region’s foggy weather, robust fisheries, and even the tasty wine!

Upwelling intensity along the west coast of North America is variable due to differences in environmental and oceanographic conditions, and northern California is home to the most intense upwelling. The California Current, encapsulating Bodega Bay, is one of just four major upwelling-driven ecosystems in the world - the interesting and unique research opportunities created by this feature of the region are one of the things that have made Bodega Marine Laboratory a magnet for researchers for over 50 years.

Why is Coastal Upwelling Important?

So, surface water is pushed offshore and replaced by bottom water - why does that matter? Although at first, it may seem that all seawater is the same, water from the depths is actually much different in temperature, nutrient content, and chemical composition than that of surface water. Bottom water tends to be colder due to a lack of sunlight, more nutrient-rich due to the decomposition of settling organic matter, and more acidic and less oxygenated. When this water gets pulled up to the surface and exposed to sunlight, the nutrients within it help fuel an ecosystem driven by high primary production.

This increase in abundance of organisms at the lowest level of the marine food web allows for the consumers higher up in the food web to obtain the food and energy that they need to thrive. This is the reason for large populations of marine mammals and sea birds, as well as the abundant fisheries in this region. In fact, the impacts that primary production have on the rest of the community is demonstrated most clearly during years when upwelling occurs at low rates and results in increased mortality rates of sea birds and other top consumers due to the lack of food in the ecosystem.

Much research is being done at Bodega Marine Laboratory to determine the effects that climate change will have on marine ecosystems, specifically addressing the main threats in the forms of increased water temperature and ocean acidification. Ocean acidification refers to the process by which atmospheric carbon dioxide is dissolved into the ocean, causing the ocean to increase in acidity. This change in seawater chemistry has a variety of detrimental impacts on marine life such as reducing the quality of organisms’ hard shells, altering the ability of individuals to communicate with one another and respond to predator cues, and more that researchers are actively studying.

Recall from above that one characteristic of upwelled water is that it is more acidic than the surface water it replaces. Therefore, populations of organisms that have evolved in ecosystems that experience consistent upwelling, such as Bodega Bay, have been historically exposed to waters that are more acidic than populations in ecosystems where upwelling is weak or absent. This raises the question of whether populations from regions with stronger upwelling have evolved differences in their tolerance to acidity and, if so, will populations from these regions be more or less successful in the face of ocean acidification?

Research is currently being done to answer these questions by Dr. Dan Swezey, a collaborator within the Bodega Ocean Acidification Research Group. His work studying red abalone populations has shown that red abalone from strong upwelling populations (northern California) are more tolerant of acidic waters than those from weaker upwelling populations (southern California), an important finding that may help the abalone aquaculture industry to stock these abalone culture facilities elsewhere with more resilient breeding adults.

Many coastal species, both vertebrates such as fish and invertebrates such as crabs, begin life by hatching out from an egg and going through a larval stage in which they are very tiny and vulnerable to being transported away from suitable habitats via water movements. The Morgan Lab has been focused on understanding how the movement of surface water due to coastal upwelling influences the larval distribution patterns of different coastal species. The distance that larvae disperse from their parent populations is species-specific and can be tracked by deploying novel robotic larvae that simulate the organisms’ vertical swimming patterns and serve as an experimental field test of how larvae might regulate how far they are transported.

Graduate student Veronica Vriesman in the Ocean Climate Lab has combined biological and geological research techniques to investigate the effects of coastal upwelling on mussel shell growth. Mussels are “ecosystem engineers” that create habitat space for many other species to thrive on the coast; therefore, the influence that upwelling events have on mussel health may be indicative of how the entire community is influenced by upwelling events. Veronica compares patterns in mussel shell structure over the last few decades to understand the effects of upwelling on how adaptable mussels are to their changing environments.

Past projects, such as the NSF WEST project led by Dr. John Largier, utilized physical and biological sampling & modeling to make advances in understanding the fundamental nature of upwelling mechanisms. These past projects provided crucial information such as the effects that too much wind, interrupted wind, and more have on the process of upwelling. Now, BML is home to the Bodega Ocean Observing Node (BOON) that constantly monitors coastal conditions associated with upwelling such as seawater temperature, salinity, dissolved oxygen, phytoplankton chlorophyll, wind speed and direction, sea currents and waves, and more. These data are vastly important because they allow researchers to track upwelling over time and study how these coastal conditions affect the organisms and communities as a whole on the northern California coastline.

Thank you to the researchers at Bodega Marine Laboratory who shared their knowledge and expertise to make this article possible. 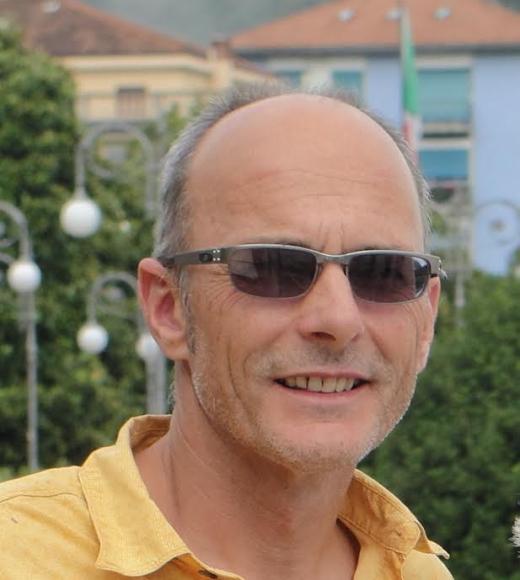 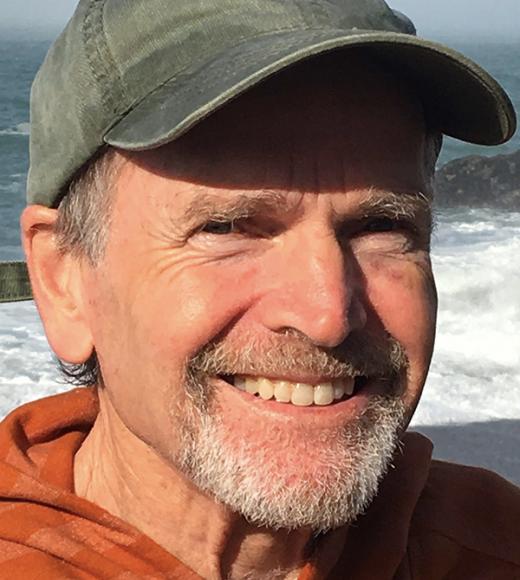 Dr. Morgan specializes in determining how critical linkages in the complex life cycles of marine invertebrates and fishes regulate populations and communities in a dynamic coastal ocean. 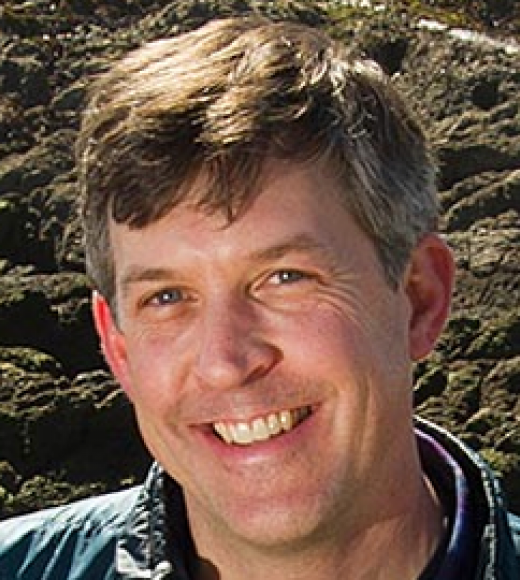 The Sanford Lab is interested in how marine populations and communities vary in response to both natural oceanographic variation and anthropogenic climate change. Our research seeks to integrate ecology, evolution, and biogeography to understand the processes that shape marine communities: both over large distances along coastlines, and in an era of accelerating climate change. 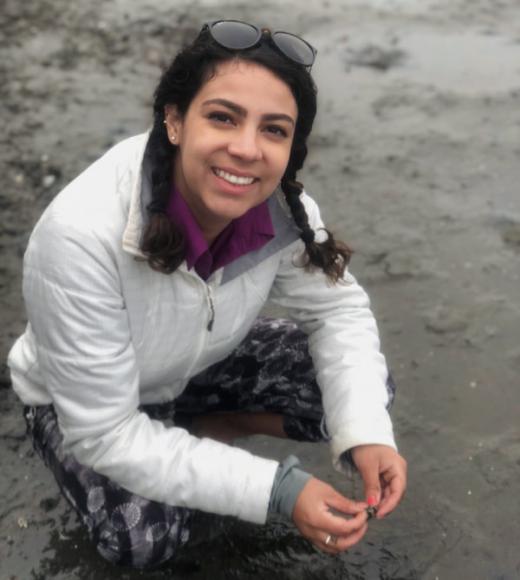 Department of Earth and Planetary Sciences 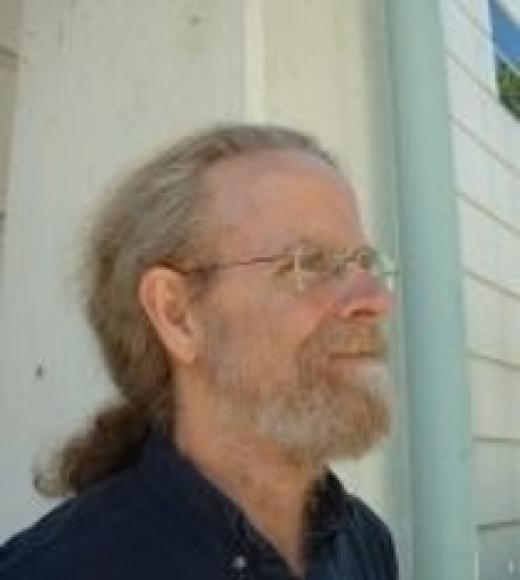 College of Agricultural and Environmental Sciences

Jenna Quan is a fourth-year undergraduate student majoring in evolution, ecology, and biodiversity and minoring in education. She has a passion for ecology and biology, especially in marine systems. Upon graduation, she hopes to pursue a Ph.D. in ecology and continue on in academia. When Jenna is not working on research projects at BML or in a genetics lab, she is co-captaining the UC Davis Dance Team and working on her knitting projects!